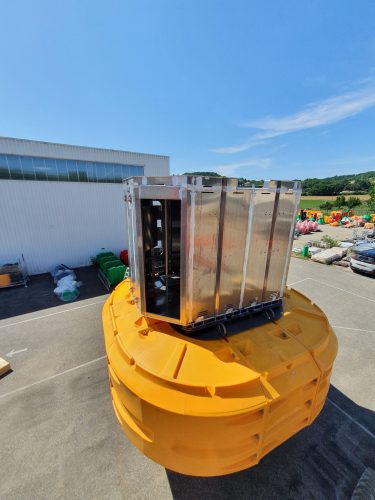 The client came to us just over a year ago after learning about the profiling data buoy we had supplied to PML. Together with Mobilis, we delivered the DB 14000 — Mobilis’ biggest data buoy. This floating platform is set to be deployed off the South Coast of England in the next few weeks to aid PML’s research on the Western Channel Observatory and to provide an innovation platform to Smart Sound Plymouth.

SINTEF Ocean was looking for a similar data buoy to be based in the Trondheim Fjord as part of the OceanLab Observatory being established there. Originally, they came to us looking for the same buoy we had delivered to PML. However, it soon became apparent that SINTEF’s buoy would need modifications and a much larger surface area to accommodate the additional sensors, equipment and deployments required. We, therefore, liaised with the client and Mobilis to design a new buoy based on the DB 14000 and, thus, the DB 24000 was born! 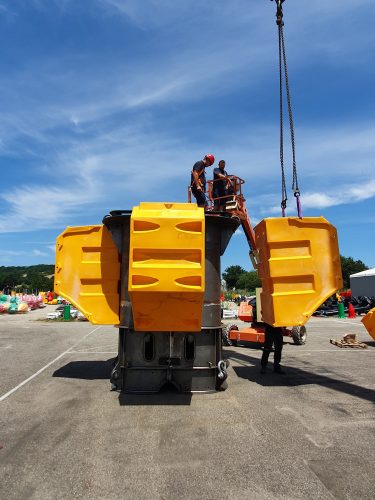 Mobilis’ DB 24000 buoy has been designed with one key purpose in mind: research. The buoy will be able to carry out dives to a maximum depth of 55 metres and at a speed of 10 centimetres per second, lowering a cage full of sensors to different depths to measure variables in the surrounding water.

Due to the sheer volume of sensors and equipment required for this buoy, it was necessary to scale up the original model. To put it into context, this new buoy is about five metres in diameter compared to the DB 14000, which is around 3.6 metres. The tower on it is also enormous to allow for additions such as solar panels and wind turbines.

Whereas the earlier DB 14000 model features just one moon pool (the tube which allows instruments to be lowered through the centre of the buoy to access the open sea), the DB 24000 has four. One contains the profiling cage, and another contains an acoustic doppler current profiler (ADCP), which measures sea current at different depths and allows researchers to see how water particles move via echo technology. The remaining two moon pools will house additional SINTEF and third-party sensors.

This buoy will be used to collect and communicate a range of real-time data for the OceanLab Observatory, which

will be made available for research and industry users as part of national research infrastructure, funded by the Research Council of Norway. The impressive array of sensors on board can perform a variety of functions, including particle imaging, acoustic communications and a ‘plug-and-play’ interface for custom sensors. From measuring the plastic or gas content of the water to capturing images as imperceivable to the human eye as phytoplankton, the research possibilities of this project are endless.

For a profiling buoy such as this to be able to perform dives safely and efficiently, its design must be robust. The final deployment in Norway presents specific challenges to the structural integrity of the buoy, which needed to be considered from conception to manufacture. 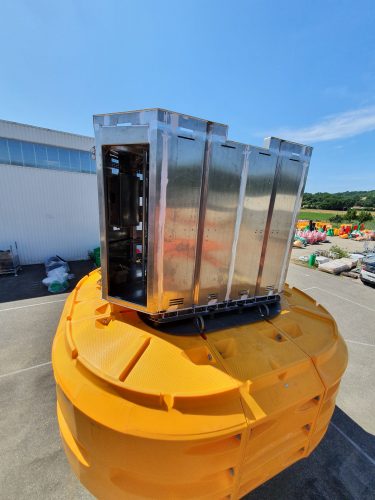 The buoy is powered by batteries, which are situated at the centre of the buoy to ensure less impact on its overall stability. Additionally, although the water should not freeze, the buoy will need to operate in waters as cold as 20 or 30 degrees below zero. Because of this, the buoy must be suitably resilient to withstand such conditions and perform dives safely without risk to the equipment. As part of this solution, we incorporated a fuel cell onboard the structure to provide an uninterrupted, self-generating energy supply during the cold Norwegian winters.

Mobilis’ design also incorporates a sophisticated winch control with sensors to detect sea conditions, ensuring the cage is only lowered if the conditions are suitable. The computer that controls the profiler sits on the buoy, taking continuous measurements to determine how much it is moving to prevent the cage from being lowered or brought back on board in rough seas. SINTEF will be able to communicate with the buoy and programme it — controlling the speed, depth and frequency of each dive — over their telemetry link, which is facilitated by antennas located on the inner mast.

Following a successful factory acceptance test in the first week of July, the DB 24000 will be put into the Mediterranean Sea, just off the coast of Marseille, for a month’s testing.

Once it has been cleared, the buoy will be deployed in Norway during the first week of September. Here the buoy is set to become the heart of the new marine observatory, acting as a hub for communications alongside other buoys, autonomous surface vehicles and subsea robotics.